Facts about Alsace tell you about the Province in France. The capital city of Alsace is Strasbourg. It is estimated that Alsace is inhabited by 1,817,000 people. The total land area is 8,280 km per square. Find out more stats and facts about Alsace below:

Let’s find out the location of Alsace. It is situated on the eastern border of France. The province has a great view for it spans on the west bank of Upper Rhine.  The neighboring countries include Switzerland and Germany.

Facts about Alsace 2: the smallest region

In the metropolitan France, Alsace is called as the smallest region. In the northern part, it is bordered by Germany. In the west, you can spot Lorraine. The south is bordered by Switzerland. Find out another province in Alberta facts.

You can find out a lot of forests in Alsace. You can spot them in Bas-Rhin and Vosges. If you want to know the highest point in Alsace, you can go to Haut-Rhin. It is located in the ballon de Guebwiller. It sits on the elevation at 1426 meter.

Can you guess the climate in Alsace? It has the hot summer due to the semi continental climate. The winters are dry and cold. 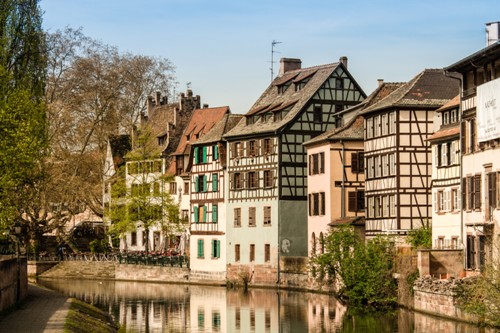 The second driest city in France is located in Colmar City. It only has the annual rain at 550 mm. There is no need to wonder that Colmar is a good place to start the production of Alsatian wine or vin d’Alsace.

Facts about Alsace 6: one of the most industrialized regions

Facts about Alsace 7: the economy

The economy in the province depends on various sectors.  You can find automobile industry, forestry development, brewing, hop harvesting, wine production and tourism.

Facts about Alsace 8: the foreign companies

You can also find various foreign companies in Alsace. 35 percent of the companies here are built by the foreigners from Scandinavia, Japan, America, Germany and Switzerland.

Facts about Alsace 9: the famous food

If you are visiting Alsace, don’t forget to enjoy the local traditional foods such as Choucroute, Charcuterie, Tarte a l’oignon and Munster Cheeses.

The agricultural sector in Alsace is very important to the economy. Most people are concentrated in Mulhouse, Colmar and Strasbourg.

Are you fascinated with facts about Alsace?

Related For 10 Facts about Alsace

Let me tell you about one of the interesting provinces in Canada in Facts about Alberta. Have you ever

Let me show you one of the 27 administrative regions in France by reading Facts about Auvergne.   Puy de

If you want to learn more about the history, culture and largest city in the province on the west