If you are interested to know more about one of the famous sports in the world, check Facts about Archery. In Bhutan, archery is called as the national sport. But you can find that France has competed more often in the field of archery during the Olympic Games. In the past, archery was not a type of sport. It was used as a skill to attack and kill the enemies. Let’s find out more facts about archery by reading the following post below:

Facts about Archery 1: the longbowmen

The English people were famous with their longbowmen.  During the medieval era, do you know that more than 10,000 English forces were longbowmen? It occupied a half of the English army.

Facts about Archery 2: the summer Olympics

During the summer Olympics, archery was introduced in this international event in 1900, 1904, 1908 and 1920. Since 1972, the archery has been included every time the summer Olympic conducted. Get facts about ancient Greek Olympics here.

Are you a South Korean? You must be proud to find out that the country has won more gold medals in the archery field in Olympic Games.

Facts about Archery 4: the origin

Let’s find out the origin of archery? The archery has been conducted since the Paleolithic period. In the past, it was only a simple game using the arrows and a bow. 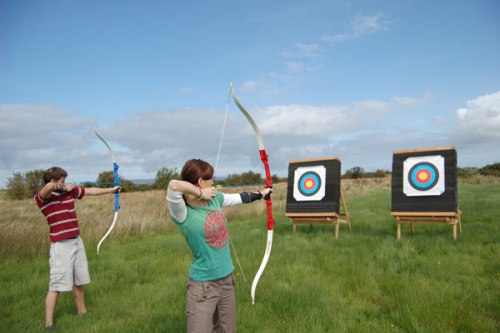 Facts about Archery 5: being a archer

It is not easy to become a good archer. You can to develop and learn the skill. You need to practice to use bows and arrows to shoot the right target.  In this modern day, you should master the modern devices for the archery.

Have you seen the recurve bows?  If you check out their image, you must be impressed with the chic and high technology features. The design of recurve bows is inspired from the archery design used by the people 3500 years ago.

Facts about Archery 8: the warfare activities

As I have stated before, archery was not used for sport in the past. It was used for the warfare activities. The first people who used the first arrows and bows were the Babylonia in 2340 BC.

Lottie Dod is one of the famous female archers. She was the winner for five times in 1887 till 1893 at Wimbledon’s female singles.

In 1999, Geena Davis was located in 24th position in US archery championship for women.

Do you have other facts about Archery?

Related For 10 Facts about Archery

Facts about Cheerleading inform you with the intense physical activity which involves the usage of yelling dancing, jumping, and

Get the interesting information about the former professional rugby union player on Facts about Brian O’Driscoll. He was born

Let me inform you with the famous Irish mixed martial artist on Facts about Conor McGregor. You can find