One of the important American leaders for nonviolence, civil rights, gay rights and socialism is explained in Facts about Bayard Rustin. He was born on 17 March 1912 in Pennsylvania and passed away on 24 August 1987. The civil right work was his main concern when he was alive. He became a stage singer and nightclub singer when he relocated to Harlem, New York City in 1936. Here are other interesting facts about Bayard Rustin below:

Bayard Rustin is considered as one of the leading activist in Civil Rights Movement in 1947 till 1955. He contributed to initiate the Freedom Ride in 1947. He also focused on the issues of racial segregation and civil disobedience.

Rustin also involved in the organization of Southern Christian Leadership Conference under Martin Luther King Jr.  He helped to reinforce the leadership of King. Get facts about American Civil Rights here.

Facts about Bayard Rustin 3: the philosophy

The main philosophy of Bayard Rustin that he liked to spread to other people in the civil right movement was the non violence practice. He encouraged the people to have the nonviolent resistance.  This philosophy influenced him a lot after he worked in Gandhi’s movement in India.

In 1955 till 1968, Rustin became the leading strategist in Civil Rights Movement of United States.

A. Philip Randolph was the African American labor union president and socialist who appointed Bayard Rustin as the chief organizer for the Washington for Jobs and Freedom in 1963.

His action and philosophy was inspirational. There is no need to wonder that the young activists like Stokely Carmichael and Tom Kahn were influenced by Rustin.

The focus of Rustin changed to the economic problems for the unemployed and working class of the African Americans after the passage of the civil right legislation in 1964-1965. Get facts about African American History here.

In 1972, Rustin was appointed as the honorary chairperson of Socialist Part of America. Then the name was changed into Social Democrats. In 1970s, he became the national chairman.

Rustin was involved in various humanitarian missions in 1970s and 1980s. He went to Cambodia and Vietnam to aid the refugees.

In 1987, he passed away. At that time, he was on his humanitarian mission in Haiti. 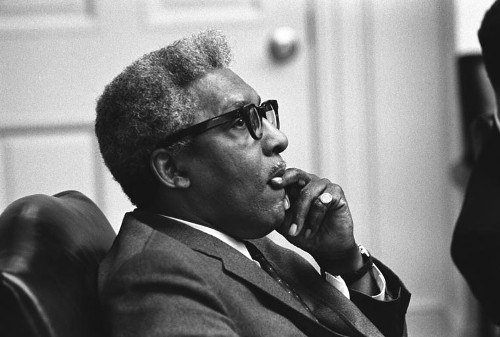 Are you inspired reading facts about Bayard Rustin?

Related For 10 Facts about Bayard Rustin

Facts about Edward Elgar tell the readers about the notable English composer. He was born on June 2nd, 1857

Facts about Ellie Simmonds narrate the personal and professional life of the British paralympian swimmer. People began to recognize

Let me elaborate the interesting Facts about Elisha Otis in the following post. Have you ever heard about Otis?