Let’s find the interesting facts about the country situated in Southeast Asia in Facts about Cambodia. The official name of this country is Kingdom of Cambodia. In the past, it was called Khmer Empire. Cambodia shares borders with various countries like Vietnam to the east, Thailand to the northwest and Laos to the northeast. Cambodia has the total area at 69,898 square miles or 181,035 square km. Check facts about Cambodia by reading the below post:

Facts about Cambodia 1: the population

Based on the population, Cambodia is ranked in 70th place of the most populous country in the world. It is inhabited by more than 50 million people.

Facts about Cambodia 2: the official religion

Theravada Buddhism is considered as the official religion in Cambodia. More than 95 percent of the people who live in Cambodia embrace this religion.

Facts about Cambodia 3: the minority groups

Cambodia is inhabited by some minority groups such as the hill tribes, Chinese, Vietnamese and Chams people.

Hun Sen is the head of the Cambodian government. He is the ruler for this country for more than 25 years. Now he is considered as the longest serving non royal ruler in South East Asia.

Phnom Penh is the capital of Cambodia.  The city has an important role in the country for it serves as the cultural, economic and political center.

Norodom Sihamoni is the current monarch of Cambodia. He became the head of state after being selected by Royal Throne Council. Cambodia is constitutional monarchy.

Facts about Cambodia 7: the ancient name

Kambuja was the ancient name of Cambodia. Jayavarman II became the king of Khmer Empire in 802 AD. The kingdom lasted for around 600 years. Check Burundi facts here.

Angkor Wat is the famous landmark in Cambodia. It is included in UNESCO World Heritage Site. 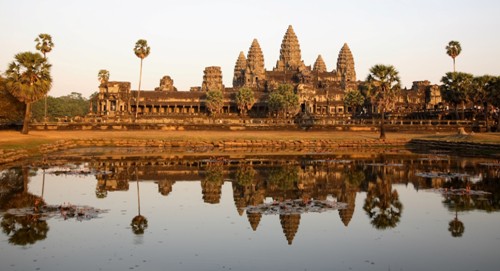 Facts about Cambodia 9: the culture of Cambodia

There are several factors which contribute to the development of Cambodian culture. The factors include Angkorian culture, Hinduism, Theravada Buddhism, modern globalization and French colonialism. The development and promotion of culture in the country is at the hand of Cambodian Ministry of Culture and Fine Arts. Get facts about Burma here.

Facts about Cambodia 10: the cuisine

The staple grain of the Cambodian people is rice.  The fish that people get from Tonle Sap and Mekong Rivers are important in the people’s diet. The key ingredients in Cambodian cuisines include tamarinds, kaffir lime, garlic, lemon grass, fish sauce, coconut milk, oyster sauce, black peper and soy sauce.

Do you enjoy reading facts about Cambodia?

Related For 10 Facts about Cambodia

10 Facts about Countries in Europe

Facts about Countries in Europe will tell you about more about the European continent. The location of Europe is

Facts about Angola talk about a country located in the Southern Africa. The capital city of Angola is Luanda.

Facts about Colombia present the interesting information about the country located in the northwest of South America. There were