Facts about Cattle talk about the most common type of domesticated cows. They are included in the genus bos and the subfamily Bovinae. The people have cattle in the farm for they want to take the milk, dairy products and meat from the cattle. The beef produces the meat. Sometimes, the cattle are used as draft animals. For instance, the farmer will use bullocks and oxen to plow or pull carts. Here are some interesting facts about cattle:

Facts about Cattle 1: other products from Cattle

Cattle are very important for the life of the people. It provides the people with meat, dairy products and milk. The dung of cattle can be used for fuel or manure.  The people can also get leather from the cattle.

Facts about Cattle 2: the religious meaning

Cattle are associated with the religious meaning in some regions in the world. For instance, cattle are considered as a holy animal in India. 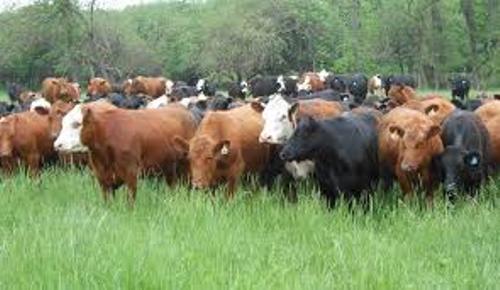 Facts about Cattle 3: the number of cattle

Based on the report in 2003, the people estimated that there were around 1.3 billion cattle in the planet.

Facts about Cattle 4: the digestive system

The digestive system of cattle is wonderful. The hard digestible plants can be eaten by the cattle easily since it has ruminant digestive plant.

There are four compartments in the stomach of cattle. Those are the abomasums, omasum, reticulum and rumen. The largest one is the rumen. The cud chewing is very common in the cattle since they have to re-chew and regurgitate the food.

Facts about Cattle 6: the smallest compartment in the stomach

The smallest compartment in the stomach of cattle is the reticulum. People often call it honeycomb.

Facts about Cattle 7: the hardware disease

Cattle are very prone to hardware disease. This health problem is caused by the metal objects consumed by the cattle. The deposit of the objects inside the reticulum causes inflammation or irritation. Check caribou facts here.

Facts about Cattle 8: the heaviest bull

Can you tell me the record of the heaviest bull in the world? It is taken by a Chianina. It was named Donetto. It had the weight at 3,840 lb or 1,740 kilogram. In 1955, Donetto made its appearance in Arezzo Show.

Facts about Cattle 9: the gestation period

The cow has the gestation period around 9 months. The weight of calf reaches 55 to 99 lb or 25 to 45 kilogram. Get facts about catfish here.

Facts about Cattle 10: the life span

The life span of cattle can reach 25 years old. Big Bertha was the oldest known cow in the world. In 1993, it died at the age of 48 years old.

Do you have any opinion on facts about cattle?

Related For 10 Facts about Cattle

Facts about crustaceans inform us about a group of arthropods. The members of this group are barnacles, krill, shrimp,

Facts about Australian Animals talk about the exotic and unique animals that you can find in Australia. One of

Facts about Bed Bugs talk about the parasitic insects. They feed on blood and are included in the cimicid

10 Facts about Cats and Dogs