Let’s find out the information about an American rock and roll musician in Facts about Bill Haley. Haley was born on 6 July 1925 in Highland Park, Michigan and died on 9 February 1981. His full name is William John Clifton Haley. His famous band was Bill Haley & Haley Comets. The name of this band was taken from the famous Haley’s Comet. During 1950s, he and his band were famous and popular. Let’s find out more interesting facts about Bill Haley below:

William Albert Haley was his father. He could play mandolin and banjo. William came from Kentucky. Maude Green was his mother. She got classical training and was a keyboardist. The Haley had to move to Boothwyn, Pennsylvania due to the great depression. At that time, the young Haley was only seven years old.

Facts about Bill Haley 2: a guitar

His parents gave him a real guitar after they saw him making a stimulated guitar from a cardboard.

When Haley was famous as a rock and roll musician, there were various hits that he created. Some of them included “Shake, Rattle and Roll”, “Rock Around the Clock”, “Razzle Dazzle”, “Rocket 88″,”See You Later, Alligator”, and “Skinny Minnie”.

Facts about Bill Haley 4: the early career and life of Bill Haley

Bill Haley struggled to become a famous musician. It was described in his 1956 Decca album Rock Around The Clock which had an anonymous sleeve notes. It stated that when Bill was thirteen years old, he had his first professional job. Moreover, he was only paid $1 per night. Find out Bessie Smith facts here. 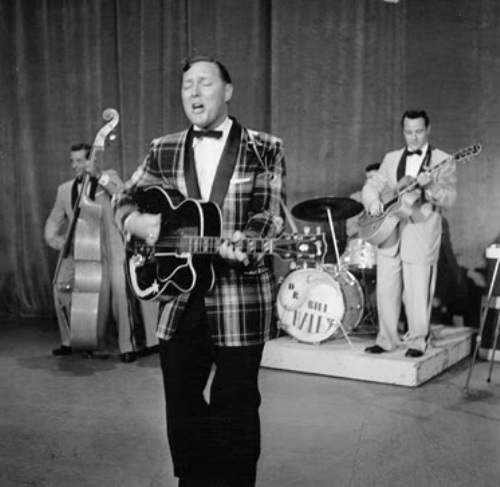 Facts about Bill Haley 5: the Saddlemen

“Crazy Man, Crazy” was the first rock and roll which sat on the American chairs. It was ranked no.11 on Cash Box and ranked no.15 on Billboard. Haley recorded the song in 1953. Marshall Lytle and Haley wrote the song even though Lytle got the credit for the song in 2001.

Facts about Bill Haley 7: “Rock Around the Clock”

“Rock Around the Clock” was another song written in 1953. It was made specifically for Bill Haley. On 12 April 1954, he recorded the song. It was a failed song for Haley. On the Billboard charts, it sat at no.23.

“Shake, Rattle and Roll” made him famous. It was a cover version of Big Joe Turner. Get facts about Big Sean here.

Do you enjoy reading facts about Bill Haley?

Related For 8 Facts about Bill Haley

If you like to know more about the African music, you have to study Facts about African Instruments. The

Let me show you the notable American hip hop group from America in Facts about Black Eyed Peas.  The

Let me show you the interesting Facts about Archie Roach if you want to know the famous Australian musician.

Have you ever listened to the Hound Dog by Elvis Presley? The writers of the notable song were Jerry