Find out an interesting god of Egypt in Facts about Anubis. Anubis is one of the important Egyptian gods. He is called as the god of dead, tombs and embalming. There is no need to wonder that he was very important in the mummification process.  This god is very unique since it has the distinctive black head of a dog or a jackal with the body of a man. Let’s find out more facts about Anubis by reading the following post below:

The ancient Egyptian people believed the afterlife. When they died, the soul would have the journey to the underworld called Duat. Anubis was believed to protect the soul since Duat was filled with a lot of dangers and terrors.

Facts about Anubis 2: the mummification process

The mummification process is important after the death of a person in Ancient Egyptian culture. But not all people can afford to pay for the mummification.  Anubis is linked with the mummification ritual since he would guide the dead people in the underworld kingdom of his father, Osiris.

Let’s find out the alternative names of Anubis. He was often called Imiut, Anup or Anpu.   The jackal dog, the flail and Imiut fetish are used to symbolize Anubis. His wife was Anput. She was depicted with the head of a jackal and the body of a woman.

Facts about Anubis 4: the family

Anubis is believed to be the son of Osiris and Nephthys. His sibling was Horus. The goddess of purification, Kebechet was his daughter.

Facts about Anubis 5: the story of his birth

The Egyptian mythology states that Anubis was born after Nephthys made Osiris drunk. Without his consent, Nephthys made him drawn into her arms. Then he gave birth to Anubis. Find out ancient Egypt gods facts here.

Facts about Anubis 6: the embalming

The mythology states that the embalming process was invented by Anubis. He did it for the first time to the corpse of his father, Osiris. 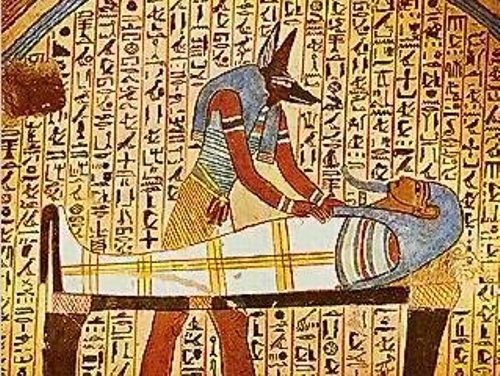 He was one of the most worshiped gods in ancient Egypt.  You can find him carved in various tombs of Egypt.

Facts about Anubis 8: the priest

The one who conducted the mummification process was the priest. They wore a jackal mask bearing the image of Anubis when performing the rituals. Get facts about Egyptian mummies here.

Anubis was found by Isis who raised him. There is no need to wonder that he was the faithful helper of Isis.

The body of Osiris was rebuilt by Anubis after he was killed by Set. He did it through the mummification process.

Are you impressed with facts about Anubis?

Related For 10 Facts about Anubis

Facts about Achilles tell you about the famous Greek hero. If you check out his family, you will be

Facts about Ares tell you about the god of war. He was famous with his bronze armor. This powerful

Facts about Aphrodite talk about the Greek goddess of love and beauty. She is also associated with desire, passion

Let’s find out the mythological story in Facts about Aries. If you hear the word Aries, it always reminds