Facts about Battering Rams inform you with the siege engine created during the ancient era. This tool is used as the splinter of wooden gates and breaks the masonry of fortification wall. It was made of the heavy logs. There will be some people who have to carry and operate it because of the weight. The tool will be propelled with force. Here are some interesting facts about battering rams for you:

Facts about Battering Rams 1: the success

The people would be successful in using the battering rams if the log was very big. But it should be easier to move.

Facts about Battering Rams 2: the later design of battering ram

People created a new design of battering ram in the future. They make it from the fire resistant canopy with an arrow proof. It used wheels to mount the canopy. The ropes or suspensory were used to swing the log inside the canopy.

Even though the battering ram is big, heavy and massive, it is considered as one of the most effective weapons because it can be used to break the brick and stone wall. The materials are prone to damages and cracks if the blows using this machine are repeated.

Even though the massive version of battering rams is not found today, the handheld version is still popular. Find out facts about aboriginal weapons here.

The battering rams were used in several famous sieges in the world.  Some of them were seen in the siege of Constantinople, fall of Rome, destruction of Jerusalem and Crusades.

Humpty Dumpty is one of the famous rhymes for children. It talks about the popular myth in Gloucester. It is believed that the rhyme tells the people about the English Civil war during 1643 siege Gloucester which used battering ram. However, it was only a myth because the story was not true. There is no record about the usage of battering rams in the siege. 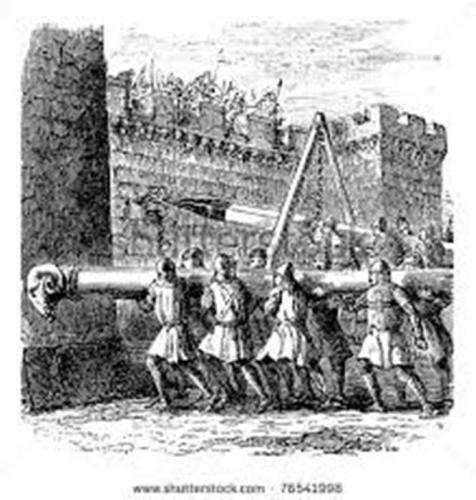 A capped ram is a type of battering ram. It looks different because the head features an accessory.  The weight of capped ram is heavier than the uncapped one.  But the effectiveness of this ram is greater to destroy buildings and wall.  It is usually made of steel or iron. Get facts about ancient Greek weapons here.

Related For 7 Facts about Battering Rams

Facts about British Slavery inform you with the institution of slavery in British Isles. Before the Roman occupation, slavery

Let me show you Facts about Apollo 11 if you want to know the successful mission on the month.

If you want to know the civilization which dominated most parts of the Mediterranean thousand years ago, you have

Facts about American Slavery tell you about the history of slavery in United States.  During the 18th and 19th